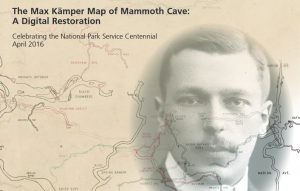 The Max Kämper Map of Mammoth Cave – A Digital Restoration

„The work of German engineer Max Kämper, who explored extensive areas of Mammoth Cave in the company of guide Ed Bishop in 1907-1908, the meticulous hand-drawn cave map would for decades prove the most reliable tool for navigating the miles of darkness – its tangled lines of ink the equivalent of Theseus’ ball of twine in this natural labyrinth.
The history of this unique document and its creator are topics of considerable interest under study by several competent scholars, and beyond the scope of this limited treatise, but the cultural and scientific impact of the Kämper Map as an object is significant in its myriad influences on the study of Mammoth Cave, and thus it merits special consideration for its conservation as an at-risk object, and for the preservation – indeed, the rescue – of the information it contains.

This effort had its inception in conversations between the author, who as the Visual Information Specialist for Mammoth Cave National Park frequently received requests for representations of the Kämper Map for use in publications, and the Park’s Curator, who indicated that demand for access to the original document was common to the point of being detrimental to the object. At the same time, the Park Ecologist had immediate need of a digital version of the Map for several scholarly purposes, so the author undertook, initially, to simply acquire a detailed scan of the original object in order to provide ready access for research and publications and decrease wear, handling and exposure of the original. The author’s initial inspection of the Map, however, revealed conditions that propelled an expansion of methods to achieve the same set of goals.
…..
As an active tool for cave research, the Kämper Map has had remarkable longevity, and remains relevant for many purposes; demand to review it is likely to continue beyond the point that would be curatorially prudent. Some alternative means of satisfying research needs must exist that does not compromise the object’s integrity. Moreover, some thought must be made against the possibility, however remote, of the entire loss of the object to fire or other disaster.
In short, the one-and-only Kämper Map is vanishing before our eyes and physical restoration would be inadvisable at best, yet the research community cannot afford to lose the information it contains, and the National Park Service is required to both protect it and grant access to its contents at the same time.
Thus, we arrive at the digital solution now completed.
Beginning in 2011, this five-year project has applied new technologies and digital methods to an archival problem for which traditional conservation methods for maps and similar ephemera would not have served. Now, in 2016, the digital restoration of the Kämper Map has avoided the difficulties and risks inherent in physical conservation of a unique original and offers extended opportunity for research and data discovery while preserving the original for future generations.“