E.A. MARTEL’s Visit to Mammoth Cave, USA, in 1912
The story behind an inscription

A discovery made recently in Mammoth Cave, USA, by Cave Guide Kerry Wood provided a true sensation to speleo historians: In „Hovey’s Cathedral“, a section of this cave, he found an inscription made in 1912 by E.A.MARTEL, well-known French speleogist. There is no doubt about its authenticity. Even though the inscription is located in a flooding zone, MARTEL’s name can be recognized easily – ninety years after it had been scratched into the wall. Only fragments of the exact date can be identified; but in all probability it was 0ctober 12, 1912.

Only one other cave inscription made by MARTEL, the „Father of Speleology“, was known so far. In Aven Armand, France, he scratched his name and the date of discovery (sep 19, 1897) into a stalagmite. This inscription was still legible 50 years later; since then it has disappeared under layers of newly formed calcite. Unlike many of his successors MARTEL had made it his habit to leave the caves he explored largely untouched.

In 1912, MARTEL travelled the United States together with a group of European geographers upon an invitation by the Geographical Society of New York. He used this opportunity for an excursion to Mammoth Cave that even then was termed „World’s Longest Cave“. Between October 10th and 12th he visited those parts of the cave that were then accessible to tourists. Cave Guide Ed Bishop accompanied him.

Four years earlier, Ed Bishop and Max Kämper, a German engineer, had drawn an amazingly precise map of roughly 22 miles of cave galleries (1,4). This map was kept under lock and key, however, and was not shown to anyone because the owners of Mammoth Cave rightly suspected that cave passages might extend underneath adjacent properties.

Thus, MARTEL used Horace Hovey’s „Handbook of Mammoth Cave“ to guide him on his tours through the cave. This handbook had been published shortly before. It contained five maps: One (very faulty) overall map drawn by Hovey himself, three section maps by Max Kämper showing Visitors‘ Routes No. 1-3, and a sketch by Hovey outlining Route No. 4, leading into the deepest parts of the cave, discovered only a few years before.

Upon Hovey’s recommendation, Ed Bishop took his guest to these farthest corners that very few visitors could ever have seen before. This tour took at least twelve hours and included a crossing of „Echo River“ by boat. The route is via „Mary’s Vineyard through „Martel Avenue“ to „Hovey’s Cathedrals“; discovered in 1907, and very probably included visits to „Gerta’s Grotto“, explored in 1908 by M. Kämper, and to „Creighton Dome“.

To MARTEL this was the culminating experience of his visit to Mammoth Cave:

„Hovey’s Cathedrals and their neighbours Nelson, Enbigler, and Edna’s Dome are of truly impressive dimensions. They remind me of the large calcite pillars of Lombrive but are greater in space and numbers. These deepest areas of Mammoth Cave offer one of the most spectacular sights I have ever seen underneath the earth. It is absolutely necessary to facilitate the entry to these areas by levelling paths, filling up crevices, installing bridges and hand-rails along the pits, and ladders where climbing is required, etc.“ (3, p.61)

MARTEL, who was 53 at the time, remembered the route from „Mary’s Vineyard“ onward as particularly difficult. He wrote:

„The route is very exhausting on the whole, and really difficult in some sections. Two and a half hours (there and back) of crawling on all fours through narrow channels, underneath low ceilings and on narrow ledges. Deep holes must be by-passed – you have to force yourself through rock-slips and climb up walls.

In short, all the gymnastics required to explore crumbly and non-developed caves. Two passages are particularly annoying: Pinson’s Pass and Bottle Hall where you have to creep through a veritable bottleneck to get into a chaotic gallery that Hovey named after me. This difficult gallery twists its way to Helectite Hall and Galloway’s Dome on the left, and to a grandiose group of pits on the right!“ (3, p.33) 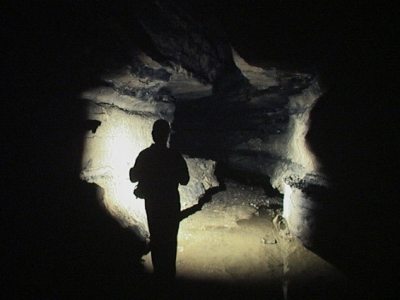 The information about the passage to Helectite Hall stems from Hovey’s Handbook and is based on M. Kämper’s and E. Bishop’s explorations. In all certainty neither MARTEL nor Hovey had ever been there. The tour to Hovey’s Cathedral and Gerta’s Grotto was all MARTEL could accomplish in his limited time. Even so, the demands that this tour made on him had been extreme:

„It was down there that I become thoroughly disgusted with the strict anti-alcohol laws in the State of Kentucky: Two long days spent in a damp, dark, giant catacomb, with nothing to drink other than aqua simplex („pure water“ would be a misnomer), herb tea or ginger beer (which tastes like sugared pepper)! And the same thing above in the hotel: Water, tea, or ginger beer to accompany extremely poor meals. A horror to European speleologists! Without a small bottle of rum from my personal luggage I could never have finished this very strenuous visit to Hovey’s Cathedrals.“ (3, p. 33)

Small wonder that MARTEL, stressed by the adversities of this trip, broke his own rule and scratched his name into the wall of this solitary but spectacular place where very few people ever penetrated. After all, he had seen innumerable inscriptions all along the customary visitors‘ routes. Since the beginning of tourism in the first half of the 19th century, hosts of visitors had left in-scriptions, with the benevolent assistance of cave guides. Tourists tried to leave their names in the most inaccessible places such as the cave ceiling high above. This was fairly easy to accomplish by holding up a burning candle fixed to the end of a long pole. Cave guides earned generous tips by creating and accommodating such demands.

MARTEL made very efficient use of the three days at his disposal at Mammoth Cave. His observations, published in the „Spelunca“ series, are quite exact. Based on his own barometric and temperature readings he drew a fairly precise diagram of the cave sections he had visited. Also, he gave practical recommendations for the development of a touristic infra-structure.

„Notwithstanding the kind reception by Judge Albert C. Janin, Trustee of Mammoth Cave, and the assistance he lent me thanks to the recommendation by my late friend, Reverend H.C. Hovey, truth compels me to point out that fundamental changes and improvements of the economic exploitation of Mammoth Cave are absolutely necessary if the comfort and safety of visitors are to be guaranteed.

A particular clause in J. Croghan’s famous testament forbids any alterations in the cave, at the hotel, and on the landed property before the death of the last heir. Hence, the hotel is now the same as it was 100 years ago. Only the shacks of which the hotel consists show signs of having been patched up now and then. Yet the whole complex is rotten and worm-eaten. Bed sheets, floors and furniture in the rooms are decrepit. It is the fear of expropriation (1) that prevents any sort of renovation. Visitors will be shocked and embarrassed when they are confronted with the dilapidated state of such a renowned and well-frequented monument of Nature. Mammoth Cave does not even have electrical light!“ (3, p.62)

(Footnote 1): In US Congress a law was being debated at the time that would have turned Mammoth Cave into a National Park. Such a law was finally passed in 1941.

MARTEL also paid a short visit to Salts Cave, which had just been opened to visitors (but was never to become a major tourist attraction). After having inspected the section between the cave entrance and the so-called Monument, MARTEL was certain that there must be a connection between Salts Cave, Colossal Cave, and Mammoth Cave, and that a cave system of at least 65 miles in length was yet to be explored underneath the hills bordering Green River (2).

(Footnote 2): Actually, just under 370 miles have been explored and measured by the Caves Research Foundation at the time of this writing. 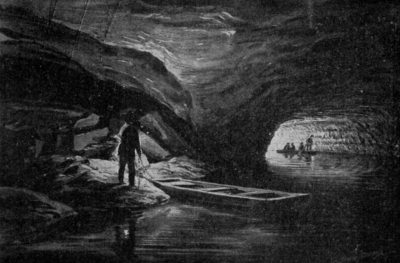 MARTEL had come to Mammoth Cave with high anticipations. Innumerable writers had praised the cave as a unique miracle of Nature, with spectacular caverns, stalactites, and subterranean watercourses. MARTEL, who knew the most outstanding European caves from personal experience and who had actually explored a number of them himself, was rather disappointed by what he saw. He had not expected that cave authors, motivated by publicity at the cost of precision, could have exaggerated in such a shameless manner.

„Echo River, which has been given this name because of its phenomenous resonance, has received too much praise by cave authors. It is nothing but a black passage with a flat, low ceiling and walls that floods have covered with mud. In short, it completely disillusions someone who has passed the rivers of Padirac, Betharram, Labouiche, Adelsberg, etc. When Hovey writes: „The subterranean world has nothing to compare with the River Route“ he certainly has not seen any really beautiful underground rivers yet. The width of Echo River varies between 6 ft. and 60 ft. Almost everywhere you can reach the ceiling with your hand.“ (3, p.30)

And yet MARTEL, too, was fascinated by the gigantic labyrinth of Mammoth Cave, like any visitor of today:

„As a result of my long visits to the cave, I have retained a strong impression of overwhelmingy monotonous, boundless infinity, as a manifestation of Nature’s forces when they shape and reshape the Earth’s crust.This is certainly one of the most grandiose phenomenä, equal to the gigantic American rivers, the cataracts of Zambesi, Iguazu, and Niagara, the volcanoes of the Andes and Hawaii, the glaciers of the Himalaya, and the inland ice of Greenland. As regards esthetic satisfaction, however, such as that provided by elegant and majestic stalactite formations, Mammoth Cave does not count, compared with the cave wonderlands of Aven Armand, Padirac, Dargilan, Betharram, La Cave in France, the caves of Majorca in Spain, and the Adelsberg Cave in Austria-Hungary.“ (3, p.60}